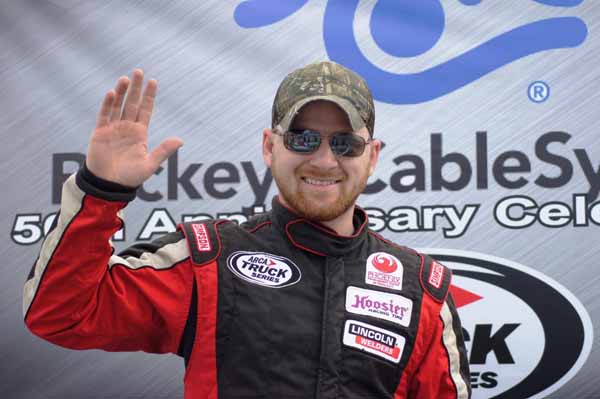 MOORESVILLE, NC: Bobby Dale Earnhardt is ready to take on Kansas Motor Speedway after being OK’d by NASCAR to jump from short tracks to 1.5-mile speedways. The driver, son of Kerry Earnhardt and grandson of Dale Earnhardt Sr., will pilot the No. 40 Chevrolet for MBM Motorsports (MBM).

Earnhardt will make his 1.5-mile debut during the Kansas Lottery 300 at Kansas Speedway in the NASCAR Xfinity Series race. Earnhardt said he received word from NASCAR that he was cleared to race larger tracks and the deal came together fast with MBM soon after.

“It was such an awesome day when I got the call from Brett Bodine,” Bobby Earnhardt said about his conversation with Bodine who works with NASCAR on approving drivers. “When he said I was OK’d for Kansas and 1.5-mile tracks… It was an amazing call – a pretty great feeling.”

Earnhardt says several small businesses made the Xfinity Kansas race possible. The young driver had fun mentioning sponsors but did so in a traditional “Earnhardt” way. Picture a slight grin while talking about his sponsors as if they had loaded the hauler.

“Have not really practiced shouting out sponsors yet, but this is really more from the heart,” Earnhardt said with a smile. “This is a real thank you! Not just a mention. Thanks to Vonda Copeland – at Copeland Insurance in Manhattan Kansas, and Jeremy… in Sterling Kansas… at Jeremy’s Paint and Body Shop. And Frank and his family in Hartville Ohio at Frank’s Glock Works. Neon Lizard Creative – amazing designers and fun folk! None of this would be happening without having supporters like these – want to give them all a big handshake and a hug!”

Earnhardt has one start in the Xfinity Series in 2017 which came at Richmond where he started 40th and finished 34th. That may not sound like a success to drivers for larger teams but Bobby was thrilled with the finish. He had one simple goal for Richmond.

“My goals at Richmond were simple – learn from the other drivers, finish the race running and not parked and deliver the car back to the team in one piece!”

Being approved for Richmond, and an attempt at Iowa, by NASCAR came from Earnhardt’s track time in the ARCA Racing Series. In 2017 the driver started three races in ARCA with a 21st place finish at Toledo followed by a 19th place finish at Elko for Hixson

Motorsports behind the wheel of the No. 3 car. Those runs garnished Earnhardt the approval from ARCA to run on an even larger track such as Pocono.

“Pocono was thrilling,” Earnhardt said. “It was different from the short track races leading up to it. But the ARCA Tricky Triangle race certainly helped my resume for NASCAR when it comes to larger tracks.” Earnhardt understands his last name is legendary when it comes to motorsports. But, the brother of Monster Energy NASCAR Cup Series driver Jeffrey Earnhardt, says he and his brother were raised to work for what you want and nothings handed to anyone on a platter. The husband and father says that he’s both appreciative and yet motivated.

“I’m working to raise money and do this on my own and start like everyone else,” Bobby said. “The last name always draws a crowd … It definitely puts pressure on me, but at the same time it gives me something to strive for. Fans expect Earnhardt’s to be at the top and I’m going to work my hardest to get to the top and be my best at it. It’s kind of hard when I have bad days because some fans jump on you. But it’s a learning thing. You have a bad day and you learn from it.”

Earnhardt will pull double duty at Kansas. He’ll be back behind the wheel of the No. 3 car in the ARCA Racing Series race for Hixson Motorsports as well as his No. 40 car in the Xfinity Series race. Both are significant numbers in the Earnhardt family.

“Of course, the No. 3 is associated with my grandfather Dale Earnhardt Sr. and the No. 40 car was the first car my dad, Kerry Earnhardt, drove in the – Xfinity Series which was then the Busch Series.”

Earnhardt says that the double race weekend has separate – but similar goals. For the ARCA Kansas 150 the driver says he has a very simple goal of helping keep car owner, and friend, Wayne Hixson in the top-twenty in owner’s points. But the overall goal for both races is a similar one that Earnhardt has applied before.

“I want to use what I’ve learned from both series, from short tracks to Pocono… and build on that at Kansas,” Earnhardt said. “I want to do well for Wayne in the ARCA race as he was the first owner to get me behind a wheel in ARCA. And, of course do well for MBM Motorsports. But, really… I want to finish the races running, do my best, learn as much as I can and then hand the cars back over to my teams in one piece. That’s still my goal – has been since I started racing ARCA Trucks years ago.”