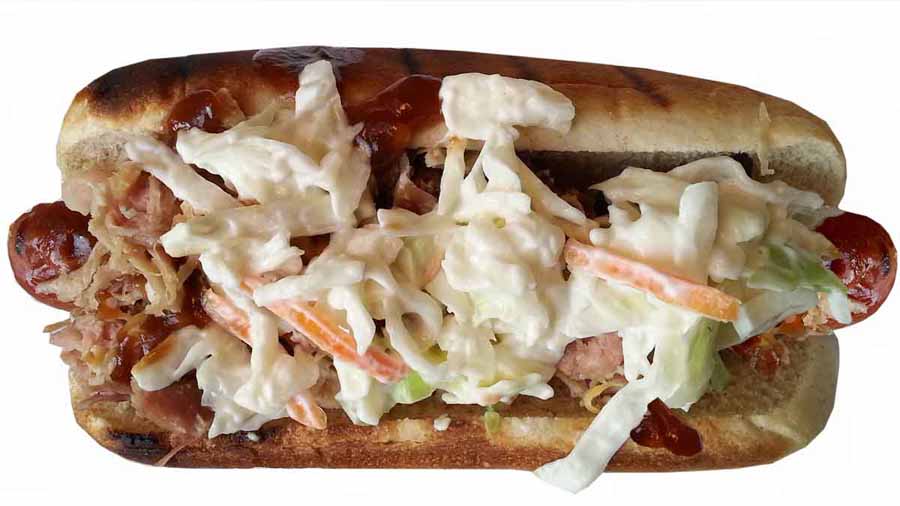 Why a Tennessee Barbecue Dog or Smoked Sausage? Because I got tired of hearing about Chicago Dogs, Fenway Franks, and West Virginia Slaw Dogs!

Actually, that’s not true. My wife Ally turned me onto a nicely made Chicago dog. You can’t live in the Appalachians without trying a West Virginia Slaw dog from time to time. And, if you’re an Auburn (or SEC) fan then you’ve probably enjoyed a Scrambled dog. I started to wonder what a Tennessee dog would be like!

I live in Tennessee and there was a ton of debate about what constitutes a Tennessee style hot dog. The suggestions included a hot dog on a bun with mustard only to variations hat included everything from Jack Daniels barbecue sauce and pulled pork! Hey… I like that! Why not combine a few more themes from the state of Tennessee?

One of the main themes coming from fans of the University of Tennessee football team was the use of smoked sausage in place of a hot dog. So, in honor of all of my family and friends who are Volunteer football fans I’m suggesting a Tennessee Style Smoked Sausage…Dog! Which works with both. Tennessee football fans love their Hound Dog mascot who’s also named Smokey!

But What about the other colleges in Tennessee, what about their mascots? Middle Tennessee has a cool blue horse named “Lightning” – celebrating the areas equine heritage as well as the aviation programs! Vandy has the “Commodore,” and Memphis has the Tiger. And… there is another dog in the state – The Tennessee Wesleyan Bulldogs. How do I string this all together?

Ok, this hot dog and smoked sausage recipe is dedicated to Tennessee Coon dogs, and Bulldogs, with a Splash of Tennessee Whiskey that is made for sipping but that has roots in old fashioned Mountain “Lightning.” Top things off with slow smoked pulled pork seasoned with a Memphis style rub! Finish off with a topping of slaw for a combinations that a Commodore would be proud to eat!

Wait… I forgot about the Titans, Sounds, Lookouts, and the Grizz… You know what? Enjoy this messy and tasty recipe!