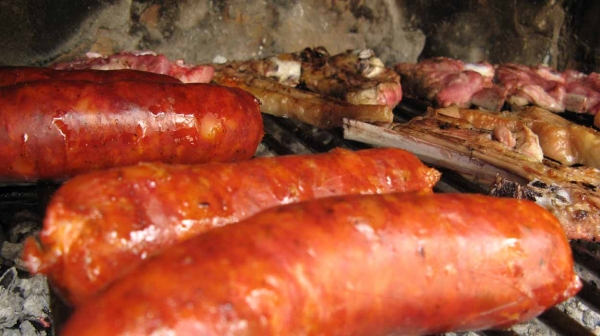 The Chorizo is one of those sausages that get’s kicked to the back of the line. I think this flavor packed sausage needs to right up front!

Jumping on the Chorizo bandwagon may be a bit tough depending on your location and grocery store selection. The good news is that this tasty sausage can be found at many ethnic grocery stores and Johnsonville even makes a version. So, chances are your local grocery could order you in some!

The Chorizo has Spanish roots with versions reaching from Mexico, South American, Portugal, Puerto Rico, and beyond. It’s commonly smoke cured and made with pork, dried smoked peppers, and packed with seasonings. It’s used like sliced pepperoni, boiled, simmered in alcohol, and of course – grilled and served up on a bun.

The best part is this – There’s not secret to grilling them. It’s almost too easy! I suggest cooking over charcoal with wood chips. If using gas, try using a gas grill safe wood chip holder.