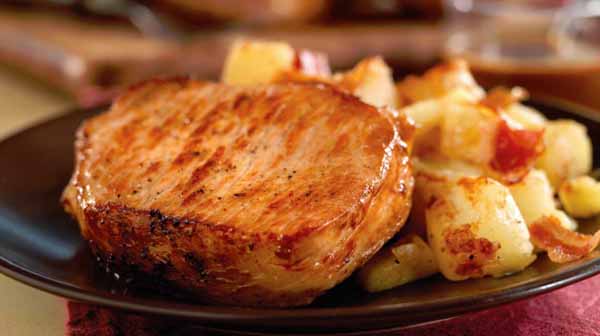 Usually I’m a sucker for using apples with just about any pork recipe. But why not an orange?

In fact – I’m thinking that oranges may be the way to go with a bunch of pork recipes because it’s an amazing flavor boost. The citrus blends perfectly with the natural flavor and you can even incoprorate orange juice with sauces and marinades.

This recipe is perfect for grilling up a big batch of boneless chops for use in sandwiches, on rice, over vegetables, or even as a starter for an Asian style stir fry! The possibilities are pretty wide open.

I could not pass up an opportunity to add a dash of trivia in so I reached out to the Florida Department of Citrus –  here’s some cool info!

Let approach this from the “served on rice” corner. – Here’s all you need to do!

What’s Next:
Marinate everything together in a zip close bag. Grill up the chops, serve with seasoned rice, Grilled potatoes, or just toss on a bun with your favorite toppings!

Ribeyes – From Oven To Grill