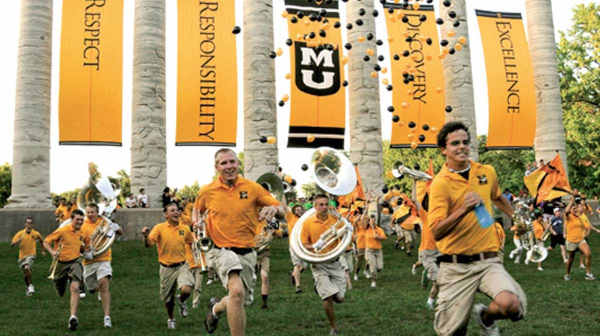 Tailgating is a longstanding tradition before Mizzou football contests, built on the tradition of enjoying the fellowship of friends, the Mizzou Spirit, and great Mizzou Football. The University of Missouri and Mizzou Athletics encourage responsible tailgating in an effort to enhance the game day experience, ensure a safe game day atmosphere to all fans, and preserve the beauty of campus.

Individuals, groups and organizations holding or participating in tailgate parties are responsible for their own conduct, and are expected to respect the rights of other and the entire University community.

In 2012, Athletic Director Mike Alden announced a $1.5 million modification plan for Faurot Field in anticipation of increased game attendance in the SEC. Alden also plans for a majority of the games to be sell outs.

This includes:
– New Field Turf with a Larger Tiger logo at midfield.
– SEC conference logos.
– “M-I-Z-Z-O-U” endzone diamonds instead of “Missouri”
– New Touchdown Terrace Seating which will increase capacity.
– Increased visiting team ticket allotment from 3,800 to 6,000.
– No stadium re-entry.
– Moving Marching Mizzou from behind the end zone to the southeast corner of the stadium.
– Increased ticket pricing.
– Repaved and new parking lots for tailgating

All logos property of their owners. Used for media use only. *Majority of information is from the official website.