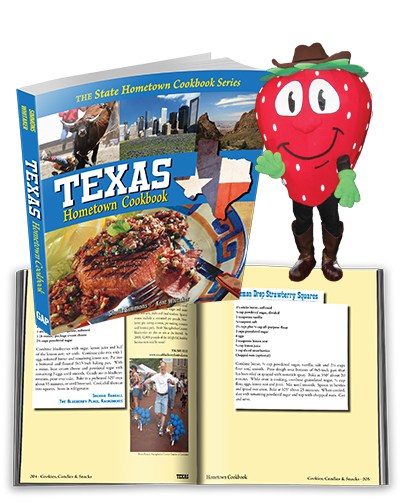 Frontier campfire cooking, spicy Tex-Mex, old-fashioned cowboy cooking, Cajun and Creole fare—the culinary traditions of the Lone Star State are just as diverse as they are delicious. Now you can discover them all with the Texas Hometown Cookbook, a collection of easy-to-follow, tried-and-true family recipes gathered from home cooks living all over the State of Texas. You’ll also explore the many tastes of Texas through the various food festivals profiled within. Learn fun facts about Texas towns and the food traditions they celebrate every year. You don’t want to miss this!

Texas is known for lots of things, but where food is concerned, its barbecue is probably the most famous. From slow-smoked brisket to baby back ribs, Texas does it all. Celebrate Texas barbecue with the locals at a number of barbecue festivals held each year across the state. One of its largest barbecue festivals is held every October in Grand Prairie. The International Bar-B-Que Cookers Association Cook-Off features more than 100 barbecue cooks who prepare as many as 600 barbecue samples over the course of several competitions. Festivalgoers will witness the Obie-Cue Backyard BBQ Championship, the International Bar-B-Que Cookers Association Invitational, Jackpot Beans, and even a cook-off for kids. As you stroll through the festival, you’ll smell delicious barbecue to be sure, but you’ll also witness unique cooking devices, like custom-made traveling pits commissioned by dedicated beef barons. Craving a taste of Texas right now? Bring the flavors of the Lone Star State to your kitchen with the Grilled Texas-Style Beef Brisket recipe from the Texas Hometown Cookbook. Complete with its own custom rub and basting sauce, this delicious brisket is smoked for 5 hours over low coals until it reaches the perfect tenderness. You’re guaranteed to love it.

Chili is another food staple with its origins tied to the Lone Star State. Thought to have first been seen in 19th-century San Antonio, chili was first introduced to the rest of the world by the San Antonio Chili Stand at the World’s Fair in Chicago in 1893. Today, the Pump Jack Chili Cook-Off in Electra still honors the history of this cherished Texas dish. Held the first Saturday of April, this annual event commemorates the discovery of oil in Electra with a CASI-sanctioned chili cook-off. In addition to Texas-style chili, visitors will also enjoy a Dutch oven dessert contest, a remote-controlled car race, and exciting entertainment featuring performances by local artists. Want to try a Texas chili recipe in the comfort of your own kitchen? Look no further than Texas Hometown’s chili recipe from the Pump Jack Chili Cook-Off. Herb’s Chili recipe is a classic chili that has been served at the Cook-Off, so even at home, you’ll get a taste of the Pump Jack experience.

The Tex-Mex fusion of American and Mexican culinary traditions typifies Texas flavor. There’s nothing like a bit of spice to kick a dish up a notch. No one knows this better than the organizers of the Three Rivers Salsa Festival. Held in Three Rivers every April, the event celebrates everything salsa and not just the food. Besides a salsa making competition and a salsa eating contest, the festival also features salsa music and salsa dancing. Visitors will also enjoy a bicycle race and dozens of food and arts & crafts booths. Try Texas Hometown’s Tomato Onion Salsa recipe with your favorite tortilla chips for a tasty snack with Texas flair.

Texas Hometown Cookbook dishes up a double-helping of local, tried and true recipes and fun-filled facts about hometowns all-over the Lone Star state. From frontier campfire cooking, to spicy Tex-Mex fare, from old-fashioned cowboy cooking, to the German influence of Central Texas, to southeast Texas’ own style of Cajun and Creole cooking, Texas cooking is diverse… and delicious. You’ll find a taste of it all in Texas Hometown Cookbook. You’ll find easy-to-follow recipes for the Texas “Big Three”—barbecue, chili, and Tex-Mex— including Chili Cheese Empanadas, Chunky Texas Red Chili, Trail Riders Barbecue Coffee Pork Butt, and many more. Central Texas brings you the down-home flavor of Chicken Fried Steak with White Gravy and Cast-Iron Skillet Okra. From Blacked-Eye Pea Jambalaya to Fried Bananas with Cream Sauce, Texas Shrimp Boil to Mexican Wedding Cookies, you’ll find delicious, hometown recipes to please everyone…. especially the cook because every recipe is easy-to-follow and uses ingredients that you probably already have in your kitchen. For those that confess to reading their cookbooks like novels (you know who you are) you’ll enjoy interesting food facts and stories about fun food festivals around the state… from Seymour’s Fish Day to Texas Rio Grande Valley Onion Festival in Weslaco, from Hot Diggity Hog Fest in Odessa to the Black-Eyed Pea Fest/October Fest in Athens. When it comes to Texas hometown cooking, Texas is like a whole other country because there is so much great food to enjoy. Texas Hometown Cookbook brings you the BEST that the Lone Star State has to offer!

The Texas Hometown Cookbook is available for purchase through Great American Publishers, a publishing company that specializes in creating cookbooks featuring tried-and-true recipes sure to please the entire family. Order your copy today.