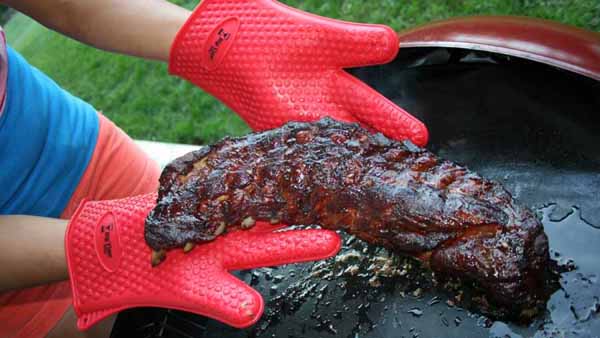 There is always a great story behind a great rack of ribs! Robert at Big Time BBQ has that story – and a great recipe!

A while back I was in need of a few grilling and barbecue items. I ended up ordering the Ultimate BBQ Bundle from Amazon seller Big Time BBQ. The bundle came with two amazing heavy duty non-stick grilling mats and a pair of grill claws perfect for pulling pork and working with large cuts as well as making tossed salads. The bundle was topped of with a pretty cool pair of grilling gloves that are head and steak over any form of grilling “mitts” ever put on the market.

That got me to thinking about the story behind these products. And, I was wondering about one of the pictures I saw online featuring Big Time BBQ products being used to turn out a batch of amazing looking ribs.

When I contacted Robert at Big Time BBQ I told him how much I liked his Ultimate BBQ Bundle, priced under $30 bucks, and we started swapping recipe ideas and how his products have been an asset to my grilling, tailgating, and long smoke sessions. The term “pro” came up and Robert said his love for grilling and barbecue started “way back” but it was not with the idea of being a “pro”

“We are hardly pros,” Robert said about he and his wife’s outdoor cooking skills. “I like to call myself a hack from way back. I started out with an old school Hibachi grill that was a tank. Things have come a long way as I have been achiveing some great results using indirect heat grilling and smoking.”

The products offered by Robert show the passion involved in grilling and his background. All of the items have a link to his family’s grilling history. The Big Time BBQ Grilling gloves are a direct result of his need for a better tailgating hot pad. The Meat Claws have a similar story – as quick and easy fast food turned into larger and larger cuts of meat. And the grill mats… well, those are just a result of the desire to do more than just grill… on the grill. Robert says attending Buffalo Bill games over the years helped him think through his product line.

“It was at the Buffalo Bills Games where I discovered my love for Grilling,” Robert said. “We have been Season ticket holders of the Buffalo Bills for 13 years now and have endured the horrific drought of missing the playoffs the whole time. I was there for many games when the Bills were awesome, so our hope is always for next year. In going to the tailgates, we always would have to prepare our food fast before the game so I received lots of practice. Over the past few years I have taken on smoking meat and I love it.”

Robert says that the ideas behind Big Time BBQ products have developed over the years as have his grills! In fact, sometimes he loses count of the grills he has and that reminds him on why he has not upgraded his smoker!

“I have too many grills and can’t fit a bigger smoker,” Robert said with a laugh. “Actually, we have some standard type of grills – the same kind that all of us ‘regular people’ use at any tailgate or backyard grilled dinner. In fact, that’s one reason I don’t consider myself a pro- we just have really mastered the ways we can use these grills. We have a Weber Genesis, A large weber Kettle and a small Weber kettle for Bills Games.”

Like his grills – Robert knows that his selection of products may be simple… but better than simple. I agree. My observation is that the Big Time BBQ products have brought the fork, oven mitt pot holder, and griddle into the future. They are not really gadgets, or trendy items that will not actually be useful in a few weeks. There are not fad items. Big Time BBQ, and the Ultimate BBQ Bundle, have items that have made common items better than ever.

Robert and his family’s love for grilling goes way back. In fact, like many of use, gathering around a grill with family is tradition. It started early with Robert who says his father gave him and his wife a grill which they cut their grilling teeth on. Now their grilling skills are getting better than ever!

“My father gave us a starter grill. And we used it several seasons as we developed our knowledge about grilling, charcoal, assorted meats, and things beyond burgers. That was until someone took ownership without our consent. (as in someone stole their favorite grill!) From there we moved on to various grills and over the years we have upgraded to using all Weber grills of different sizes. We like the fact that Weber grills are made here, and well made too.”

According to Robert you just can’t beat the whole process of grilling out with family and friends.

“It is a hearkening back to the cavemen days. Sitting around telling stories and patiently tending to your grill for half a day to produce a deliciously flavored meat that you don’t find in many places in – especially in Western New York. I think the products we offer to fellow grilling and barbecue enthusiasts are well thought out and worth adding to your grilling toolbox. I mean, a pair of grilling gloves that actually protect you and that you can shuck piping hot corn with! Or lift hot Boston Butts, turn briskets, pull lobsters from boiling water, and even work with craft beer. That’s a great item!”

Like many grilling and barbecue gurus, Robert is quick to offer up a tip and a method, but a bit short on secret ingredients! Actually, all kidding aside, his recipe for grilled gameday ribs is pretty easy. It’s actually a method of grillin that you can adapt your own spices and flavors to. Here’s how to whip up a batch of Robert’s Big Time BBQ Ultimate BBQ Grilling Bundle Ribs – named after the Buffalo Bills of course.

Directions: Place tin container on 1 side of grill and fill with water. Start charcoal in your chimney and dump on opposite side of water pan using Big Time BBQ Grill Gloves to Protect your hands from burns. Place the Big Time BBQ Grill Mat over the water pan, keeping it away from the side with the hot coals as you will have some flames rise up with the Cherry wood chips. Direct flame on the mat will harm mat. Lid should have vent over the meat opened slightly so smoke will travel over the meat, and temp gauge over the coals. Temp between 250 -300 on the hot side of the grill. Add soaked wood chips for first 2 hours ONLY. Cook time 5-6 hours you should see the tips of the bones reveal themselves and that is when they are done.