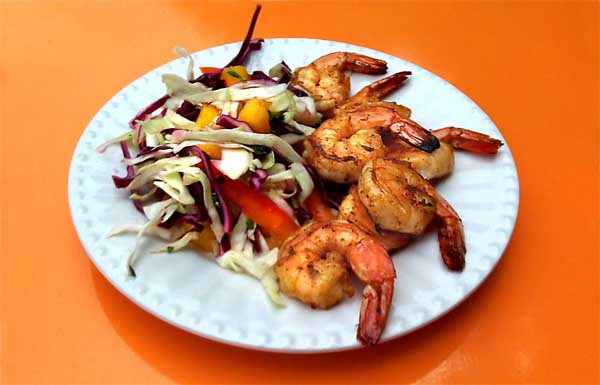 GRILLED SHRIMP AND MANGO SLAW – You can’t beat this dish that calls you to the beach!

It’s all about some Easy Grilled Shrimp and a tasty side! Summer grilling is getting started and that means plenty of grilled shrimp and other tasty items cooked over open flames! When it comes to shrimp I’m a sucker for serving a pile of the little guys, and many other seafood items, up with a side of cole slaw. But, sometimes you need a different take on basic cole slaw!

This recipe is featured in several of my articles as well as my new book Great American Grilling!

Here’s a nice version of a coleslaw with an Asian feel and the taste of Mango as well. Enjoy!

For the Shrimp! Grab a bunch of peeled and deveined shrimp and then:

The great thing about this recipe is that it’s BEAUTIFUL and packed with flavor! I suggest making an hour ahead of serving time to let the flavors mingle a bit.