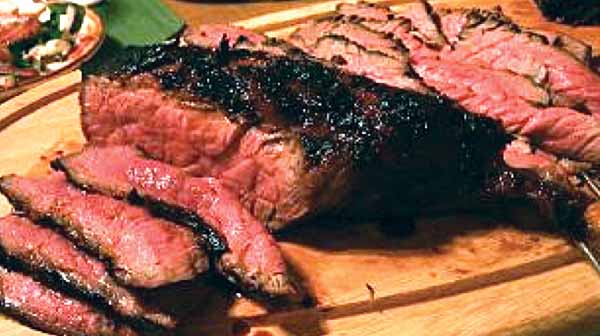 London broil and London chicken? – So you’re asking the question, “SAY WHAAAA?” Did you know that a London broil is actually a process rather than a cut!

You have to love meat trivia. London Broil is actually just a recipe, or style of cooking, for tougher cuts of meat to make them tender. So, all I’m doing with this recipe is applying some London Broil style marinade to a more delicate cut of meat – such as Chicken. But don’t worry – I’m going to give you a quick recipe for both beef and poultry.

WHAT THE HECK IS A LONDON BROIL?? Butchers will label several cuts of meat as being a “London broil”. This is confusing because as I said above, the actual term does not refer to a specific cut, but the method of preparation and cooking. Most of us think of a London Broil as being a flank steak, but you can find top round, roasts and more as being labeled as a London Broil. I’ve been told that the reason may be as simple as it’s easier to sell when labeled as being a “London Broil.” I can see that.

The Definition: Think of it this way – a London Broil is a process that includes marinating the meat for a long period of time, cooking it – such as broiling, grilling, heck -even a crock-pot, and then slicing it against the grain. All of this should offer up a nice slice of beef perfect for serving as is, or on a sandwich!

MARINADE Makes the Cut – The trick is allowing plenty of time for your marinade to work. This means for an hour, two hours, three hours or longer. Even overnight if you desire. Much of this depends on the actual cut, your choice of marinade, thickness, etc. When it comes to a marinade you can select just about anything store bought that fits your taste buds. Or try the one I have below.

Grill it! You can cook this in the oven or on your grill. The trick is medium high. Hotter than you would slow smoke a butt. And yet, not as hot as if you were grilling steaks. Why? If you overdo it, you will have London leather! If you do it right you will have a nicely seared outside with a medium well pink center.

THE KEY – Thickness, grill temperature, weather, and more come into play. So – the Key is removing the London Broil when you reach the 135 internal temp mark. Allow the cut to rest, slightly covered with foil, for about 10 minutes. You’r internal temp will continue to rise to about 145 degrees.

SLICED THIN! Since it’s a tough cut to begin with make sure you cut across the grain in thin slices. Serve up hot!

First up is a simple recipe for using beef for your London broil with a quick marinade recipe. Thats followed by a quick way to adapt the marinade for chicken.

Combine all of the marinade ingredients. In a ZIP CLOSE bag, combine the meat and marinade. Chill in fridge for about five hours. If you can do an overnight marinade or all day while you are at work then go for it. Make sure you marinade covered and chilled. If possible, flip the bag a few times to ensure even coverage. One heads up, even though you are using a zip close bag, you might want to place it all on a plate or something.

When ready, heat up the grill and wipe a bit of oil on the grates or use non-stick spray. Remove the beef from the marinade and cook directly over the heat turning as needed until outside is evenly cooked. I hate to put a time on this because it really depends on the thickness of your cut. You are probably look at 5 to 7 minutes per side, depend on thickness, heat, grill, wind, Big Foot… Ok, probably not Big Foot – but you get the idea.

You can also use the indirect heat method mentioned above. Cook to an internal temp of 135 degrees. Allow to rest for a few minutes on a plate covered with foil, slice thin and serve.

Grilled London Broil chicken
I tried using the above ingredients with chicken breasts. It worked very well for a marinade. But, since chicken is a more delicate meat, the longest I marinated the chicken was two hours. As the chicken cooked on the grill, using medium high heat basting and turning as I would a normal breast, I took all of the remaining marinade, strained out the veggie chunks and placed them in a small skillet with some marinade. I brought it to a boil and then used this reduced mix to brush over the breasts right before I removed them from the grill.

You can also try with a whole chicken for a marinated Beer Can chicken and even grilled chicken wings! Don’t count out pork, venison, other wild game, and even as a quick marinade for Tuna Steaks! Enjoy your broil!