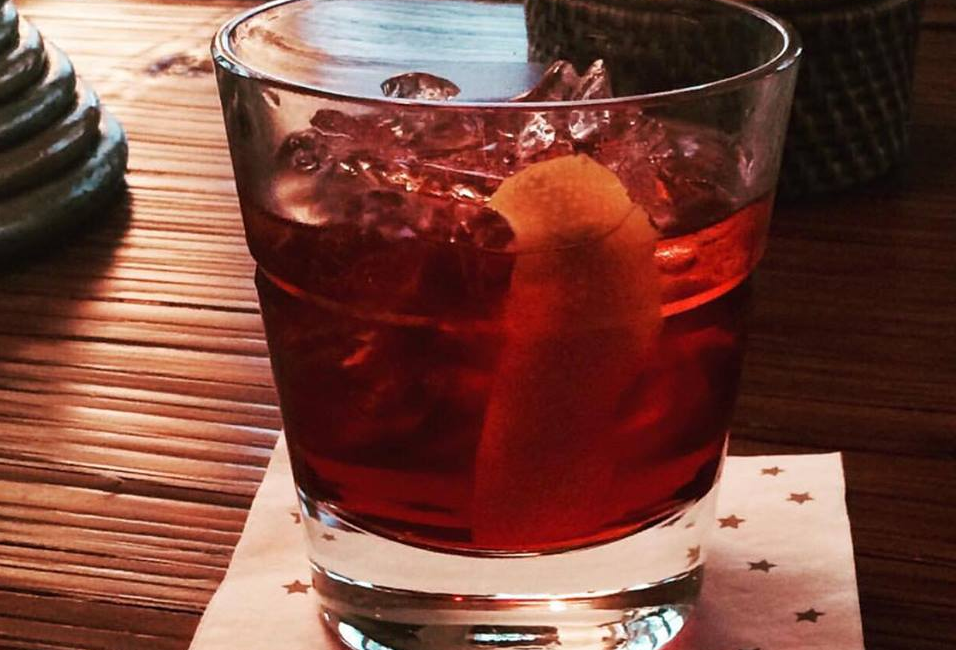 My longtime high school friend Cindy in Nashville sent me this recipe and photo for a drink she said I had to try. So, here’s Cindy’s Music City Negroni. Looks like Cindy put her worldly skills to work in finding this classic. But, there’s some info you need to know about this cocktail before you break out your shaker.

The Negroni is an Italian cocktail that’s made of one part gin, one part vermouth rosso (red, semi-sweet), and one part Campari. It’s then garnished with orange peel – sometimes other things depending on how your local bartender puts their twist on it.

According to Cindy, and Wikipedia, the exact origins of the drink is actually not known. But – there are some good stories about how it came about.

The most widely reported account is that it was first mixed in Florence, Italy, in 1919, at Caffè Casoni (formerly Caffè Giacosa), located on Via de’ Tornabuoni and now called Caffè Roberto Cavalli. Count Camillo Negroni concocted it by asking the bartender, Fosco Scarselli, to strengthen his favorite cocktail, the Americano, by adding gin rather than the normal soda water. The bartender also added an orange garnish rather than the typical lemon garnish of the Americano to signify that it was a different drink.
– wikipedia

Then, the story goes further to include the founding of a distillery!

After the success of the cocktail, the Negroni family founded Negroni Distillerie in Treviso, Italy, and produced a ready-made version of the drink, sold as Antico Negroni 1919.[6] One of the earliest reports of the drink came from Orson Welles in correspondence with the Coshocton Tribune while working in Rome on Cagliostro in 1947, where he described a new drink called the Negroni, “The bitters are excellent for your liver, the gin is bad for you. They balance each other.”
– wikipedia

Things get a bit fuzzy from here. David Wondrich, who has my dream job as a “Cocktail Historian,” did some research on Camillo Negroni. Turns out, he may not have been a “count.” But, the good news for the cocktails backstory is this. He was born on 25 May 1868 to Enrico Negroni and Ada Savage Landor, and died in Florence on 25 September 1934. And, according to Wondrich’s research, his grandfather, Luigi Negroni, was a count.

Here’s where this gets interesting. According to historians, and the family of General Pascal Olivier de Negroni, claim that he was the “Count Negroni” who actually invented the Negroni way back in 1857. Long story short – here’s a recipe for a Music City Negroni – cue awesome background country music.

DIRECTIONS
Add the ingredients together in a cocktail shaker. Shake well with cracked ice. Strain into a chilled cocktail glass. Garnish with a twist of orange peel.

Wait…. what’s Campari? Great question – Campari is an alcoholic liqueur, considered an apéritif. The alchohol content varies depending on what country you reside in. Generally it’s between 20.5% to 28.5%. It’s made from the infusion of herbs and fruit in alcohol and water. It falls into the “bitters” category and is red to dark red in color.